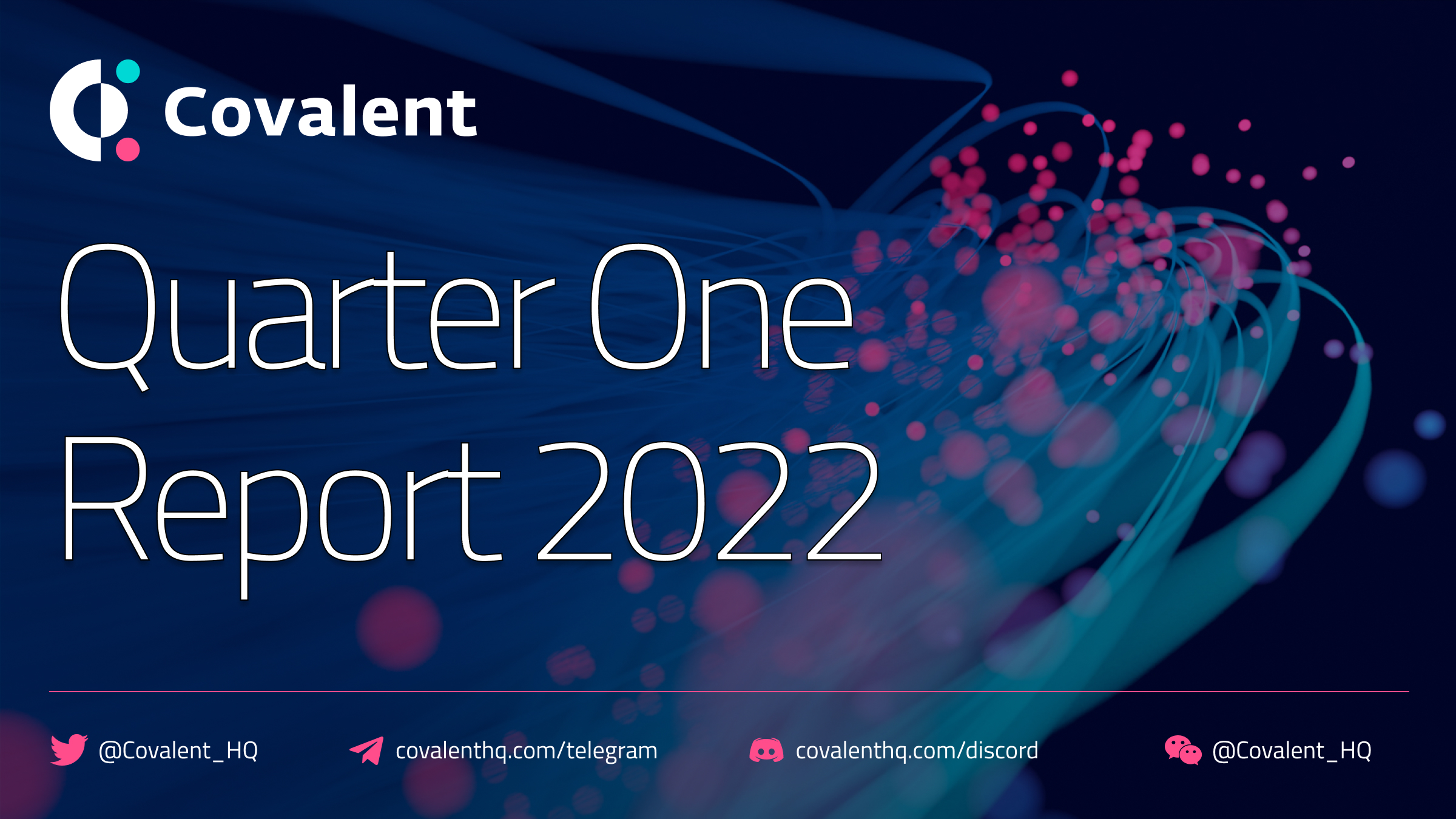 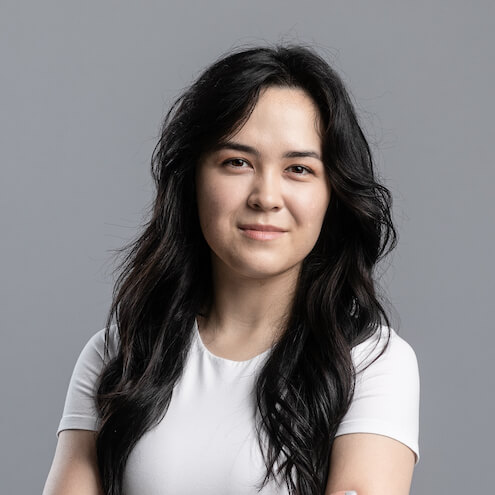 The first quarter of the new year has come and gone in what seems like a blink of an eye, but not to worry, because we’re here to give a brief pause to present everything that Covalent has accomplished so far. With a large portion of our efforts focused on some major projects coming up on the horizon (that we’re beyond excited to share with you all, in due time), there’s just no stopping the Covalent factory- even in times of “hibernation”.

Watch Ganesh Swami, co-founder and CEO at Covalent, as he presents everything that Covalent has accomplished so far in the first quarter of the new year in a message to the community.

On January 26th, Covalent had a legendary Shipping Wednesday with the shipment of four products- all in one day. This included a new whitepaper for the Block Specimen, a novel invention to securely extract data from blockchains with cryptographic proofs. The factor that makes the Block Specimen unique is that to date, no one has addressed the read scalability issue in Web3. Now, the Block Specimen presents a unified, canonical schema that can be applied across multiple blockchains. In addition to the whitepaper specification, an open-source reference implementation of the Block Specimen, a Covalent Network roadmap, and a set of wallpapers for our amazing community to celebrate the Covalent Network progress were also shipped. Later, and in continuation of Covalent’s path to decentralization and evolution of our Network, the Covalent Network docs went live on March 9th. This space was created with the intention of becoming an ever-evolving resource that the community can easily reference as the Network continues to grow.

On January 12th, Covalent BUIDL’d its way into the booming NFT scene with unleashing new real-time APIs to drill down into NFT markets. This included 2 new Class A endpoints which provide granular NFT market data for numerous marketplaces across 8 blockchains – Ethereum, Polygon, Avalanche, Moonriver, and more to come. On February 9th, Covalent added support for Solana to its API Reference: Get token balances for address endpoint, bringing the industry-leading unified API experience to tens of thousands of developers in the Solana ecosystem, and enabled developers to fetch token balances including NFTs for any wallet address on Solana with a single API call. But why stop there? On March 16th, Covalent went live with offering easily customizable NFT dashboard templates that anyone can create in under five minutes. This template pulls granular, historical NFT data from multiple blockchains including Ethereum, Polygon, Avalanche and many others, and lets you fetch and aggregate NFT data across multiple blockchains with no friction, and no reliance on marketplace tools like the OpenSea API.

Covalent had two new partnerships to celebrate in the first quarter alone, welcoming Moonbeam, the Ethereum-compatible smart contract platform on Polkadot, and RSK.

Gamification and the concept of P2E (Play-to-Earn) is quickly becoming one of Web3’s hottest topics. On February 23rd, Covalent launched it’s first free ebook exploring GameFi through in-depth, on-chain data analysis into the top blockchain games analyzed from over 4.7B rows of data. With a book as massive as this, what better place to launch its release than at one of the biggest events of the year: ETHDenver 2022. With a foreword bestowed kindly from the co-founder at Polygon, Sandeep, and a breakdown of all of our favorite Web3 games, we were pumped to see so many members of our community want to get their hands on a copy for themselves. Not to worry, they’re still available for download and can provide an infinite amount of quality information on learning all about how P2E is transforming gaming.

From February 11th to the 20th, Covalent was more than excited to not just participate in ETHDenver, but support the event as a Cypher Sponsor as well. Want to reminisce on what our team got up to? Throw it back with this article, What Happened Today at ETHDenver 2022 mentioning Leilani Ledingham, Product, and Harish Raisinghani, Developer Relations at Covalent, and their talks at ETHDenver.

On Wednesday, February 16th 5-7 pm MST, Covalent hosted an NFT battle Boomi vs. Bufficorn workshop led by Harish Raisinghani, Developer Relations at Covalent, at ETHDenver that was available to both in-person and virtual participants from anywhere in the world. ICYMI (In Case You Missed It), the live stream was recorded so you can see all of the cool BUIDLs that went down.

On March 22nd, while some members of the Covalent team were in Barcelona for the Avalanche Summit, CEO and co-founder Ganesh Swami announced Covalent’s partnership with Chainstack to enable developers to create and support Avalanche subnets, custom blockchain networks that serve a variety of project use cases and needs. Developers will have access to a full historical archive of subnet data with all of the features supported by the Covalent Unified API, while Chainstack will be providing full infrastructure for any application looking to launch a subnet. What is a subnet you ask? A subnet is like an a-la-carte blockchain, where projects can set up and build their own custom blockchain with varying levels of permissions and features, without needing to invest the resources typically needed to set up infrastructure and a consensus model. These subnets can be considered as the most significant evolution of the Avalanche ecosystem to date.

In addition to hosting two workshops at the Avalanche Summit, Covalent was grateful to be a sponsor for the hackathon segment of the Summit hosted by Encode Club in partnership with Avalanche, and even more excited to see almost 50% of the total BUIDLs submitted were built with our world-class Covalent NFT market data endpoints. Avalanche Summit 2022 provided a wonderful experience for team members to interact with our long-term partners at Avalanche and its ecosystem, and was also the location to celebrate the C-chain reaching two (2) million unique wallets!

Keep an eye out for us at any of these events below and make sure to say hi!

NFT BC: May 1st, Vancouver, BC (right in our hometown!)

We hope you enjoyed everything we accomplished in our first quarter and what here at Covalent we consider a brief moment of quiet, the calm before the storm, and we can’t wait for you to see what we have in store for Q2. 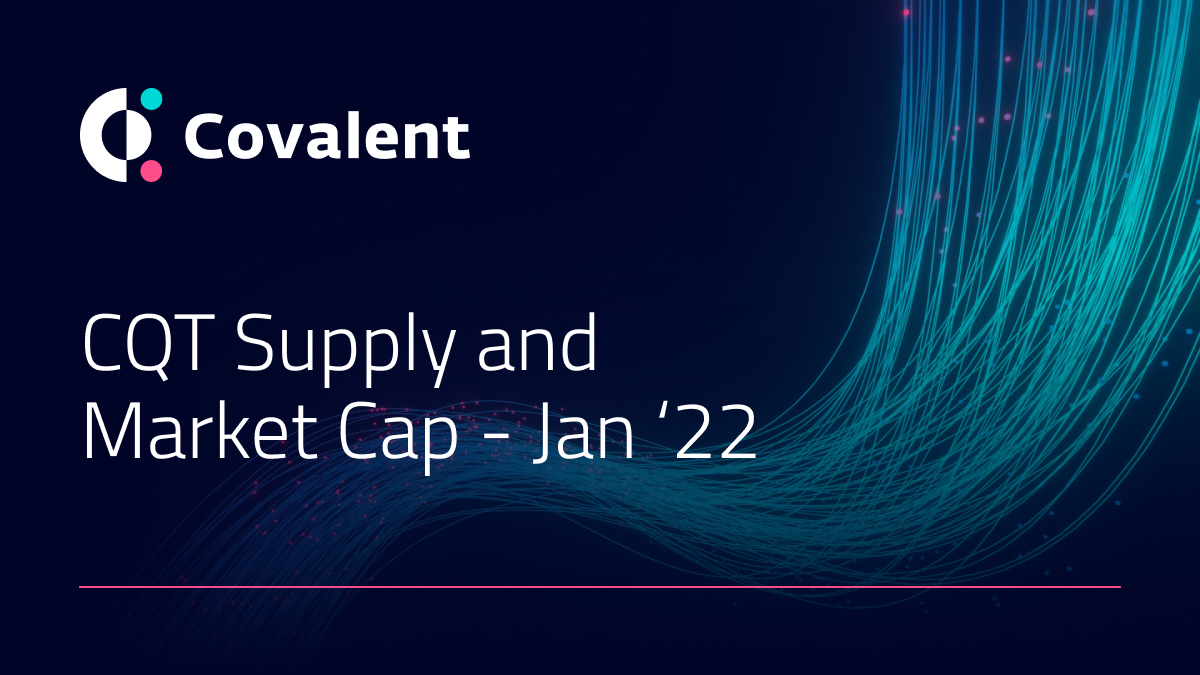