The goal of this page is to provide a high-level overview of the Covalent Network data pipeline.

A lot happens between blockchain data being extracted and indexed to a developer querying the unified Covalent API. With the Covalent Network, each of the steps - starting with the production of Block Specimens - will be responsibility of Network Operators, each of which is a node on the Covalent Network. 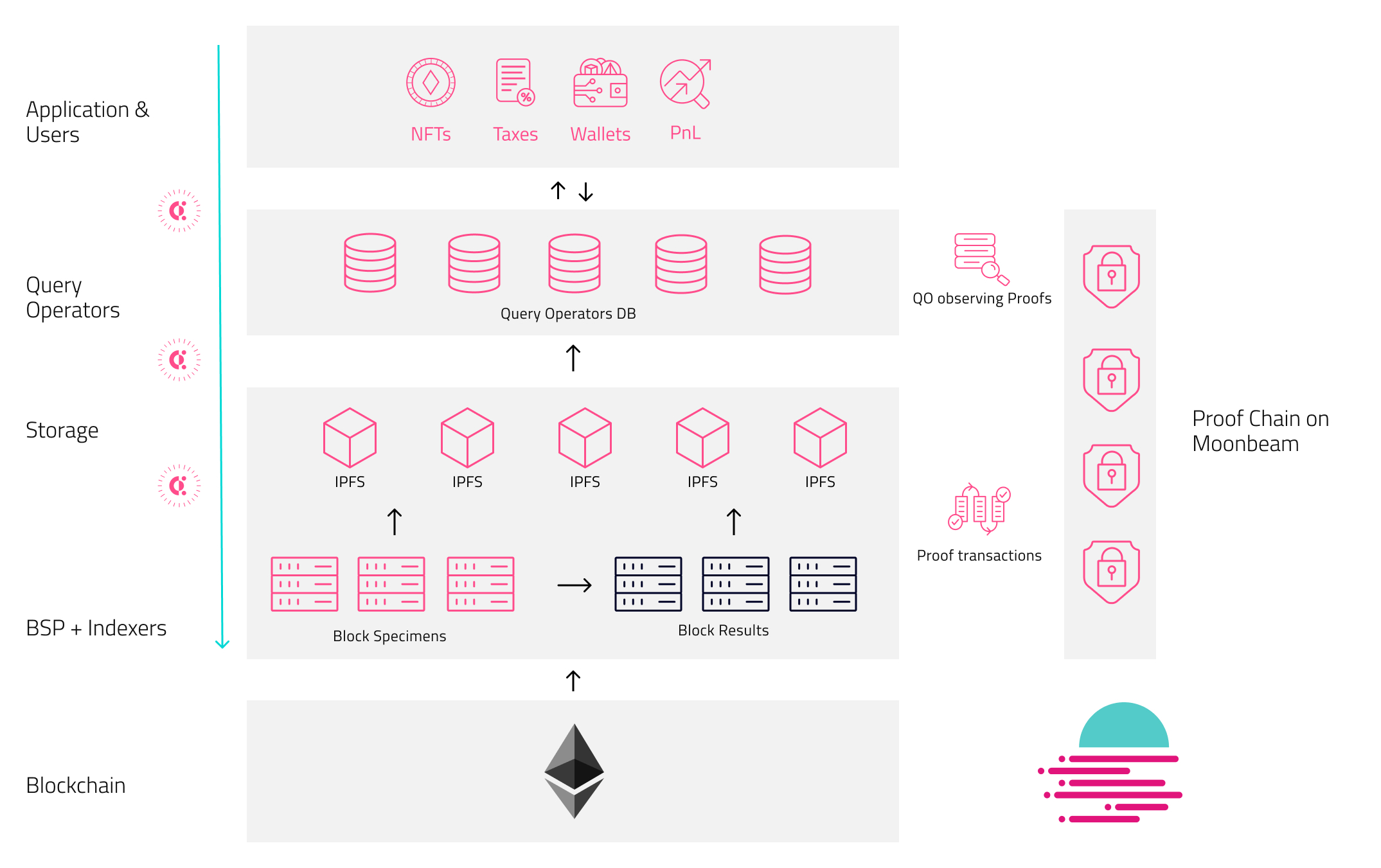 The first phase of the pipeline involves extracting raw Ethereum data and cryptographically proving this work was done honestly. The data object created from extracting this data is called the Block Specimen. Network Operators who perform this role are referenced as Block Specimen Producers. Doing so involves running the Block Specimen specification which is patch sitting on top of existing blockchain clients like Geth and Erigon.

A Block Specimen can be thought of as a block and its constituent elements. For every block mined on Ethereum, a respective Block Specimen is created.

By comparing proofs, one can detect any deviations in the data, either accidentally or malicious.

As mentioned, when a Block Specimen is created, a production proof is created and published to the Covalent proof contract. As there will be multiple BSPs, a number of scenarios can arise:

To determine what scenario has transpired and who should be rewarded per epoch, a check is done off-chain (initially by Covalent). Critical to this check is the role of the auditor which is to examine an epoch of proofs, be it historic or present. Rewards are not calculated or generated until the auditors approve or falsify a given quorum was attained by the independent distinct set of operators. To communicate this, the auditor(s) messages the Covalent proof contract.

Auditors are selected at random from a base pool of operators in which they play only the role of an auditor for that epoch. For every audit that passes they’re awarded the staking block rewards of the operator for which they successfully provide the malfeasance proof. They resubmit the proof for every block and at the end of every epoch, the operators that are found to have invalid proofs are slashed accordingly.

The primary output of this stage of the Covalent Network is Block Trace Results. These differ from the aforementioned Block Results in that they contain decoded contract states. This object contains an event stream consisting of both low-level, operational trace-events, and also higher-level, semantic state changes to the contracts and accounts, each annotated with the execution context they appeared in. Block Trace Results are, however, still built from Block Specimens.

Up to this point, all of the work that has been completed gets announced via production proofs, whether it be a BSP producing a Block Specimen, or a Refiner creating a Block Trace Result. Furthermore, operators that produce data objects will upload them to a storage instance and make them available via a data routing protocol such as IPFS.

Query Operators will observe these events while running a local data warehouse. Skimming through the on-chain announcements, the query operators will pull data objects from storage that most interest them (based on API user demand), load them into their local data warehouse and index such. Query operators can begin to return user API queries and will be compensated in CQT for doing so.

To fetch data from the network, query operators will have to pay, in CQT, into a “network fund”. How much they have to pay is proportionate to the amount of data they’ve fetched from the network. This fund pays out in turn to the production operators such as BSP and Refiners, as network rewards.

A Note on Storage

Block Specimens are the first data object created by Block Specimen Producers. Indexers take these and transform them into Block Results which will eventually evolve to support decoded contract states (Block Trace Results). While observing on-chain announcements made by both of these operators, Query operators load data into their local data warehouses from the storage instance used by BSP and Refiners. Query Operators are then able to respond to API queries.